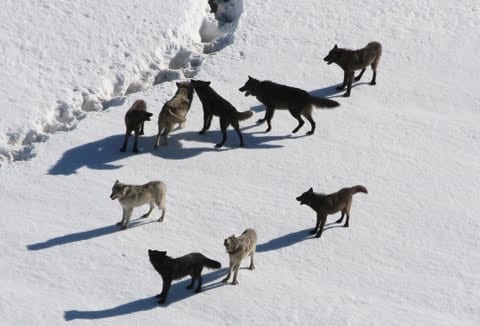 Yesterday, we went to a place in Yellowstone National Park where wolves live. We weren’t right there with them, but close enough to stand with other people with high powered spotting scopes to watch from afar. The Junction Butte pack has a good batch of new pups. Little fur balls gently tended at the den site by a parent or auntie or uncle. New wolves readying for their time as adults.

The wolves of Yellowstone were completely eliminated in the 1920’s.  By that time, they’d long been cast as evil predators, a story that became so much bigger than the truth, public policy ended up supporting their slaughter. The results were vast losses in the health of Yellowstone’s ecosystem. Yet while it took seventy years, in the end we humans showed an ability to reconsider, to get it when we’d made a mistake. By the time wolves were reintroduced into Yellowstone in 1995, science, public sentiment, and policy too had turned in their favor.

Two wolves gazing into a snowfall in the Rocky Mountains.

In our Full Ecology book, we write about the striking recovery that followed reintroduction. About how the elk who had taken to the lowlands and eaten down all the willow and other brush along riverbeds, took off into higher places where they had better chances of seeing wolves – more room to run. As a result, willow and other 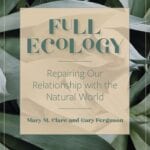 stream plants returned. The willow brought back the beaver, and the wet habitat the beaver made helped bring back songbirds.

Coming to understand the importance of wolves to the balance and health of this ecosystem holds up a mirror to our own human role. And when we take a good look, we can come slowly to see how our assertion of dominion – our choice to act as if we’re both separate from and smarter than nature – really messes things up. In our right size, we’re great stewards, living with and from land that’s abundant when tended well – when treated as the kin it is.

And yet when it comes to wolves, while we now know the important role they play, in many places they still face old urges to persecute. Statehouses in both Montana and Idaho have signed laws permitting hunting up to 90% of the wolves, and often with brutal devices like snare traps. In Wisconsin there’s also loud grumbling about wolves. On just three days in February of this year, wolf hunters killed nearly 20 percent of the state’s entire population. 216 wolves. (Curiously, three months later, a report from Wisconsin said wolves saved residents $20 million on collision repairs; as it happens wolves often run along the edges of roadways, which can keep the deer away from cars.) 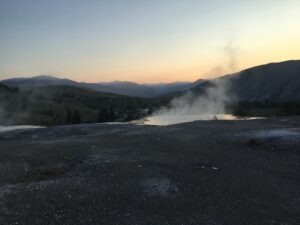 Through all of this, of course, wolves are just out there being wolves. They continue to risk their lives in hunting; the average lifespan of a wolf in Yellowstone is just 5 years – elk hooves, placed just so, are deadly. As the season turns, they return to former dens, or make new ones for raising their pups. The pack rests and feeds and wanders and plays – and plays often. And with every passing day, the young learn a bit more of what they really need to know to make it in the big wild world.